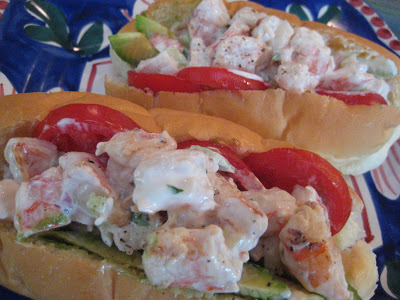 If you want to make an appetizer out of the filling, slice a baguette, add an avocado slice, the filling and top with a little cocktail or chili sauce.

So there we were, our beloved UTES down by 8 with a little over 2 minutes to go in the game last night against Oregon State. A few fans started leaving the stadium, but we just stood there in disbelief. Wondering if our 5 game winning streak would come to an end.(Read this next part really fast, with no pauses in between, because that’s how I typed it up) Then, out of no where, our offense decides to show up for the last 2 minutes of the game. In 40 seconds, we had a touchdown, then a 2 point conversion. It was 3 and out for OSU, and we had the ball back again. A couple of plays later- it was LOUIE TIME. As if. You now who I am talking about, right??? Only the best kicker in college football. (Ok, we loved Dave Carrol, who played for the UTES before his LDS mission, and played a big part in their 2004-2005 BCS run with Urban Meyer and the Fiesta Bowl win,and who also happens to come from our neck of the woods.) Louie is our man. We love him. He has saved our fannies SO many times. And so, after kicking a game winning field goal with 1 second on the game clock, I made this sandwich in honor of him. Now, it’s not really an official “Shrimp Louie”, so work with me. You know what I am going to say next…Yes, you are going to love it! Whew. I need a Valium. 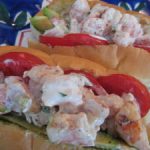