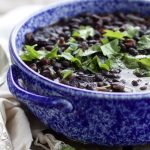 -The recipe says to remove the meat from the pot before cooking the beans, and then add the meat back just before serving. I like to remove the meat so it won't turn the color of the beans. If you look closely, the photos show a batch of beans where I did not remove the meat first. If you forget to remove the meat, it is not a problem. -If you add additional vegetables to this recipe, it will produce more liquid, which is fine, but will water down the flavors a bit. Compensate by adding a bit more of any spices used. Also, you may drain off a bit of the liquid when finished or thicken by setting the pot to the sauté mode and letting some of the liquid cook off with the lid OFF after the beans are cooked and pressure is released. The beans may also be pulsed a bit using a blender (remove about a cup or two of the beans and liquid) or an immersion blender, then replace back into pot of beans.