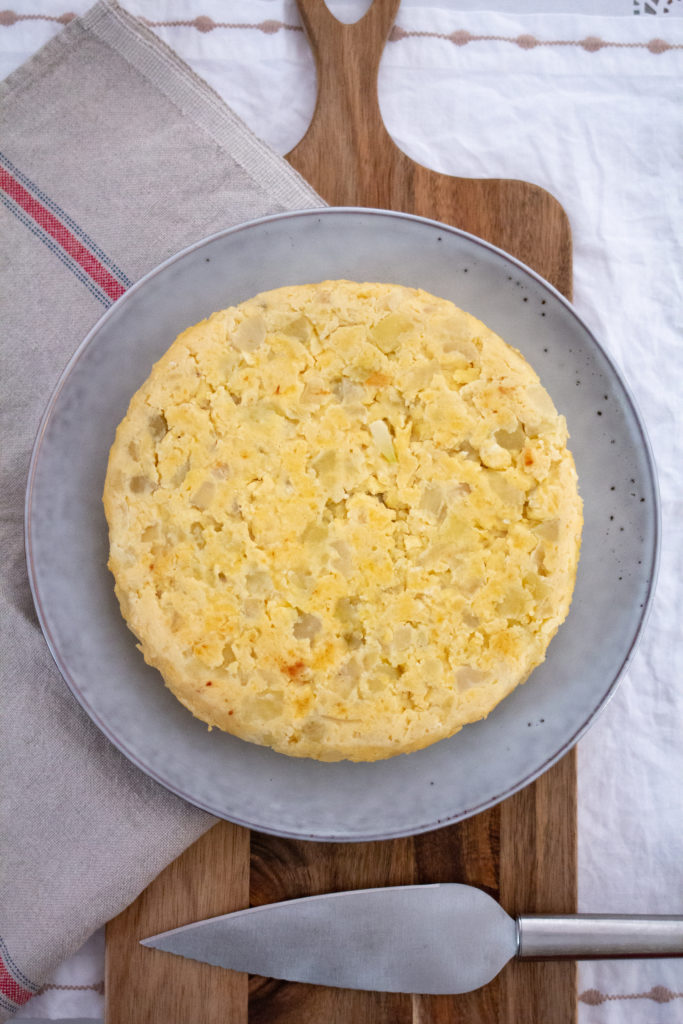 Spain is home to the famous Authentic Spanish Omelette (Tortilla Espanola)! This popular Spanish recipe is made with a few basic affordable ingredients found in most kitchens!

If a sandwich is traditional American staple food, the Spanish Omelette is a favorite day to day staple for Spaniards!

There are technical differences in cooking methods between some of these dishes, but no matter what you call it, the basic ingredients and method of cooking are similar!

The first time I ate Spanish tortilla, I was with our daughter Brooke while she was living in Madrid as an English tutor. When in Spain, there are certain foods you have to try, Tortilla de Patata is high on the list!

Authentic Spanish Omelette (Tortilla Espanola), is often served as a tapa (an appetizer or snack) on top of a sliced baguette.

“Tortilla” as it is affectionately called in Spain is usually served at room temperature, although I like to eat it while it is still barely warm!

Tortilla de Patata dates back to the 1600’s in Spain. It is said to have been fed to Spanish prisoners while held in Portugal for three years during a war! When the Spanish prisoners were released, they took the recipe (receta) with them back to Spain!

The other story widely shared has to do with potatoes, eggs and olive oil being plentiful and inexpensive in Spain dating back to the 1800’s and people of little means being able to fill up on this low cost potato omelette.

Tortilla is certainly a part of the history of Spain, and is found in almost every restaurant and made in many kitchens in the country.

The secret to successfully making a Spanish Omelette

We have lived in Spain for over a year now, and I’ve made my share of Tortilla de Patata.

Spanish Omelette is most often called tortilla de patata by locals! When we first arrived, our friends Mari and her daughter Saray invited us over to show me how to make a meal of traditional Spanish and Mallorcan recipes.

I also received a video tutorial from another Spanish native, one of our missionary friends, Hermana Lopez!

The first and (in my opinion) most important tip to making a delicious authentic Spanish tortilla is keep the heat low.

The first few times I made a Spanish omelette, I turned the heat up too high and browned the potatoes, onion and also eggs.

This mistake is difficult to remedy if the potatoes and eggs are overcooked early in the cooking process!

Use olive oil to cook the potatoes

When making a proper Spanish omelette, the potatoes (or patatas) need to be cooked in olive oil.

Make sure to use extra virgin olive oil for best results. The potatoes cook in the oil for a considerable amount of time, and will absorb the oil, giving it a rich flavor.

Of course you can cook the potatoes in the oven and then just add to the omelette, but it will have a different texture and flavor than potatoes cooked using the traditional method in olive oil.

Using olive oil makes a huge difference in this recipe! If you have the option to purchase Spanish olive oil, it is usually less expensive than Italian (which may have been imported from Spain and had an Italian label place on) or Greek olive oils.

Look for the country of origin on the container. But honestly, olive oil from any country will work. Look for an olive oil that is light in color (it will be mild in flavor and also better for cooking). Also, side note, olive oil can be reused many times (for frying) if stored properly.

Can I make a Spanish omelette with less olive oil?

The answer is yes! This recipe is for the traditional method using 2-3 cups (or more) of oil to cook the potatoes.

Many people use way less oil when making a Spanish omelette. Even though olive oil is “healthy” oil, it is still oil.

I have had many people tell me they use about 1/2 cup of olive oil, sauté the potatoes and onion together on medium low then drain before proceeding. Great option, less oil and still good results!

How should I cut potatoes for Spanish Omelette?

Opinions are strong or “fuerte” about the proper making of Tortilla Espanola. Are you wondering if you should sliced or cube your potatoes?

I soon realized it is difficult to slice the potatoes and cook them for just the right amount of time, without the potatoes sticking together.

If you slice the potatoes too thin, they stick together. If they are sliced too thick, they don’t really work well in the tortilla.

I do not recommend the use of a mandolin because I think the potatoes tend to turn out too thin.

I finally settled on dicing or cubing as the best method. The first time my friends taught me to make tortilla, they cubed and I think this is the easiest way to achieve a consistent result, especially for a beginner!

That said, I like it both ways, sliced or cubed… It is really a matter of personal preference. For cubes, try to keep the size consistent so they cook uniformly. I try to keep my potato cubes at about 1/2 inch.

What should the egg to potato ratio be in a Spanish Omelette recipe?

I have experimented with many different amounts of eggs and potatoes in the past year. My first mistake was adding too many potatoes to the mixture.

I look for the eggs to just lose the wet look and cook enough to begin to hold the omelette together before turning.

It is probably worth mentioning that in some areas of Spain, Tortilla de Patata is intentionally served runny. Meaning, the egg is not cooked all the way and after it is turned out of the pan onto the plate, the egg oozes out of the side of the omelet. Yikes.

My friend Mari suggests adding milk to the eggs when making Tortilla de Patata . I experimented with, and without milk in the egg mixture.

In the end, I think a small amount of milk results in a better finished product. Milk is not usually found in most Tortilla de Patata recipes!

You can skip it and add an extra egg instead if you like. Many of the missionaries who have eaten tortilla all over Spain say Mari’s is the best!

As you can see in the photo below, the milk definitely lends itself to a lighter colored Tortilla Espanola!

Teflon Pans are highly recommended for this recipe. While I understand teflon was not around back in the 15th century, it is readily available today and will give you an advantage when making your modern day Spanish omelette!

I recommend a 9-9.5 inch pan for cooking a tortilla that is just right in size. You will also need a plate for inverting the cooked omelette. Make sure your plate is a little larger than your teflon pan. This is very important!

In some areas of Spain, the tortilla is cooked in a smaller pan, probably closer to an 8 inch pan and the omelette is much thicker and usually more brown than I have seen on Mallorca.

To brown or not to brown your Spanish Omelette?

Since most Spanish cooks I have talked to say do not brown the outside too much, I try to keep the color light. Also, I prefer my eggs to be more on the soft side, so I keep the heat low and the outside of the Spanish Omelette light in color.

The photos on this post were taken during many sessions making this authentic Spanish Omelette or Tortilla Espanola. As you can see, the color differs quite a bit depending on how long it is left in the pan, if milk is used or not, and the temperature of the stovetop.

Is there onion in Tortilla Espanola?

This may be the most highly debated topic when sharing recipes for Tortilla Espanola. I personally love onion included in my tortilla.

Some people throw in garlic, greens, a bit of jamon, cheese, you name it, people have tried it.

Purists say Tortilla de Patatas should only include potatoes, egg and salt. The beauty of this recipe is you can adapt your Spanish tortilla to include what you like!

This authentic Spanish Omelette recipe is one you will love! It is easy on the budget, filling and delicious.

Once you get the hang of it, it is really easy to make! Here in Spain, it is most often served with a baguette and a simple salad. I suggest serving your Tortilla de Patatas with Gorgonazola Pecan Crunch Salad and our favorite bread recipe. Let me know if you try our Authentic Spanish Omelette! 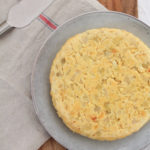 This classic Spanish omelette is made of potatoes, egg and onion and is a basic staple in most Spanish homes! It is also called Tortilla de Patata or Tortilla Espanola. Easy to make and enjoy for any meal or snack during the day!

Cook the potatoes and onion: