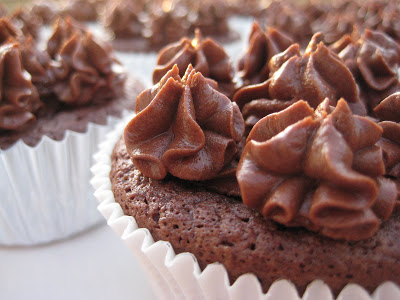 Do you ever get a brownie craving? I do. Often. They usually come late at night. When I don’t feel like baking, or after every place that would sell a respectable bakery brownie is closed. I’ll express my feelings to Grant. I’ll tell him how much I need a brownie. He will say – “I’ll go get one for you”. After many, many years of being married, he KNOWS I won’t send him to Albertsons for a brownie, so he’s safe offering at ELEVEN PM. When I want a good home made brownie, nothing else will do. Not a boxed brownie. I want one of Sheri’s really dense brownies, or a legendary (in our neighborhood) Carol Merrill brownie (actually I love the frosting even more than the brownie!), or a Barefoot Contessa “Outrageous ” brownie, or a Cooks Illustrated Classic Brownie…. So a few nights ago, I found this recipe and thought – my troubles are over. I can make a batch of these, wrap and freeze each cupcake, and have them for emergencies. Kind of a Brownie 911. Crisis averted.
Oh and btw- these brownies are really, really delish. Fudgy, chewy and chocolaty. I LOVED the frosting* too. The piping isn’t necessary, but it looked fun, so I thought I would give it a whirl.
Print

-If you don’t have a double boiler, you can either: Melt the chocolate and butter in a stainless steel or other heatproof bowl placed over a saucepan of simmering water. Or, use the microwave. Be careful not to scorch the chocolate. Heat for about 30 seconds at a time, then stir.

-I made 12 cupcakes in a standard size muffin tin. After removing from the oven, they sank a bit in the middle. If you baked longer, they wouldn’t sink as much, but the cupcake would be dry. I just filled in the indentation with a little frosting.

-**Two of the most common mistakes in making brownies are to over mix (once the flour is added) and to over bake.

-*The third most common mistake/sin: Canned Frosting. Don’t go there.