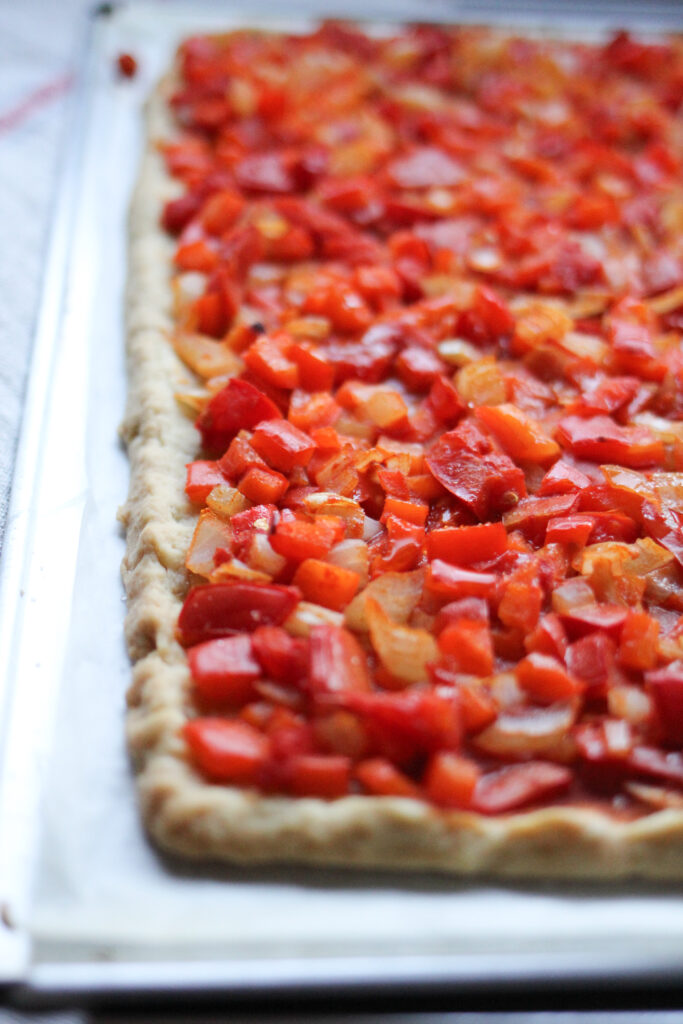 Coca De Trampo is what many people refer to as Spanish “pizza”. It is a popular recipe on the island of Mallorca, Spain. This fresh dish made of tomatoes, peppers and onions is packed with freshness, flavor and is my all-time favorite Spanish recipe!

I’ve tried them all…

“Coca” (pronounced coke-ah) as it is affectionately called by the locals is an item sold in almost every bakery on Mallorca. I have tried the coca de trampo in too many bakeries to count. Some were delicious and some, not so good… Coca is sold in many parts of the Mediterranean, but in the Baleares it is mostly sold as a savory pastry, made without leavening. In other places it is sweet and also has more of a bread-like dough.

Learned from a pro

While living in Spain, I took a cooking class from a woman who has lived in the islas all her life and learned how to make coca from her grandmother. Paula taught me that simple is best, and the best coca is made with a few fresh, simple ingredients. This recipe comes straight from Paula’s Mallorquine kitchen.

In my opinion, the key to delicious coca de trampo is a crust with just the right amount of crunch and substance to hold up the tasty “salad”.  The veggie topping is called the “salad” on top of the olive oil based crust. A healthy drizzle of olive oil and a sprinkling of salt to top the fresh baked coca is the perfect way to serve this dish.

Coca takes about 20 minutes to prepare and about the same amount of time to bake. It’s a fresh and easy appetizer or main dish if you are vegan, or if you’re like me and love to eat lighter in the summer months! Coca is also considered to be a tapa or small plate in Spain and can be served as a side dish with dinner.

How to make Coca de Trampo:

Paprika is a key ingredient in Spanish cooking. It is important to use Spanish pimentón in this recipe. Some US grocery stores sell smoked paprika, which is similar to Spanish paprika. This brand available on Amazon is one of my favorite brands sold in most grocery stores in Spain. The recipe calls for sweet (dulce) and spicy (picante) paprika, but you can just use sweet if you’d like. It’s not super sweet, more of a smoky flavor than the paprika we are used to using in the States.

This fresh and easy to make dish is found in every bakery on Mallorca! The olive oil based crust is topped with fresh Mediterranean vegetables available in most parts of the world.