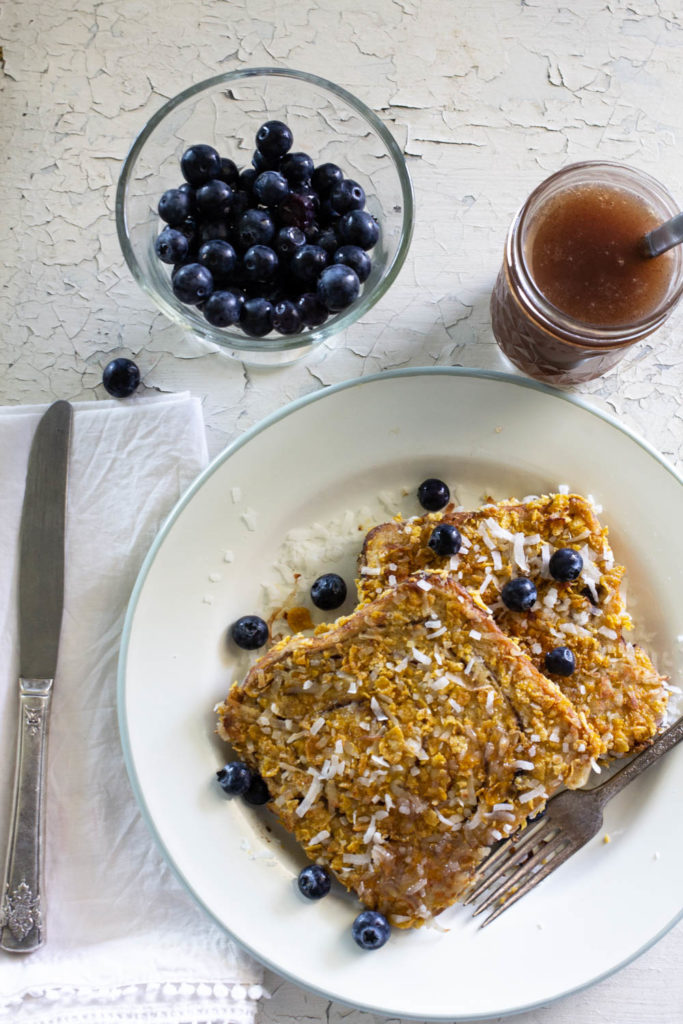 Crunchy Coconut French Toast takes and old favorite and makes it a new classic! The crunchy outer crust of this French toast is addictive and so yummy it seems almost too decadent for breakfast!

For several years in the 90’s, I went with Grant on business trips to Naples, Florida. Marco Island is a beautiful island south of Naples, on the Gulf side of Florida. Insider travel tip: If you visit after Easter, you practically have the beach to yourself on weekdays!

One year, we ate breakfast twice at a little place called Nene’s Kitchen on Marco Island. First visit, the waitress talked me into trying the Crunchy French Toast. It was such a pleasant surprise!

The second time back, I ordered the same thing. Which I normally wouldn’t do on vacation. But it complies with my “Food Rules” as Brooke calls them…

Rule #1: No ordering the same thing twice (while on vacay), unless it’s unbelievably amazing, or you are trying to figure out how to make it at home.

Rule #2 Absolutely NO ordering the same thing as your dining partner (EVER). I’ll spare you and stop at rule #2.

Following rule #1, we tried about 10 different flavors of cupcakes at this delectable little cupcake shop- Simply Cupcakes of Olde Marco. My favorite? The Key Lime Cupcake.

When I returned home, I wanted to re-create our favorite Crunchy Coconut French Toast. My friend Jo made this yummy stuffed french toast for a neighborhood breakfast not too long after we returned.

I’m not usually a fan of stuffed french toast, but this recipe was not too rich, and had the crunch I loved at Nene’s!

Here is the recipe, revised a little. I’ll print it as Jolene made it, and also with my alterations.

This easy to make coconut and cereal coated french toast is a fun change from ordinary French toast! Make sure to try the cinnamon syrup for an extra special treat.