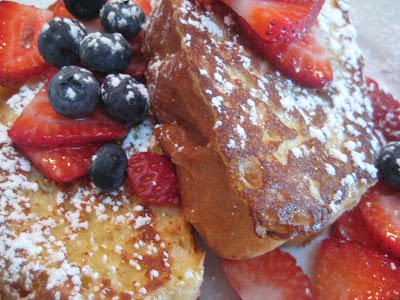 If I have a choice, I usually choose a Belgian waffle or Buttermilk pancakes over French toast. But when I have leftover French bread sitting on the counter, I’m all over making French toast. You know how I love Cooks Illustrated. In the Jan/Feb 2009 issue, they thoroughly researched and conquered the art of making French Toast. btw- Here’s my plug for Cooks. Whether you are a seasoned (no pun intended) cook, or a beginner, Cooks is a great resource. No ads, just pure recipes, and helpful cooking info. The recipes almost always include the chemistry behind why for example, it is better to dry bread in the oven vs. leaving it out on the counter when making French toast:

Normally exposing bread to air causes its starch molecules to bond and recrystallize, leading to a harder texture but most breads now include stabilizers in the form of mono- and diglycerides that slow down this process. In the test kitchen, we have determined that leaving bread out to stale isn’t nearly effective as drying it in the oven, which hardens it by actually removing moisture. One test conducted: French Toast made with hearty white bread dried in a low oven side by side with the same bread left out overnight. Each type of bread was soaked for about 20 seconds per side in the egg mixture. The oven dried version won hands down, producing French toast that was browned and crisp on the outside and tender and velvety on the inside, with no trace of sogginess.
Are you thinking what I am thinking? Someone has a little too much free time on their hands. Or maybe I should have paid a little closer attention in Chemistry class. Oh, wait, I never took Chemistry. Anyway. The article also goes into depth to explain the process by which they chose to use all egg yolks instead of the whole egg, how to properly soak the bread, and what type of bread turns out the best product.
I was a little skeptical( I know, you’re surprised). I mean, who needs a recipe for French Toast? It was absolutely delish. Really “crisp and tender”. “Sweet and puffy.” Just like they said it would be. Yum.
5 from 1 vote
Print

Hosting Thanksgiving this year? We have the guide