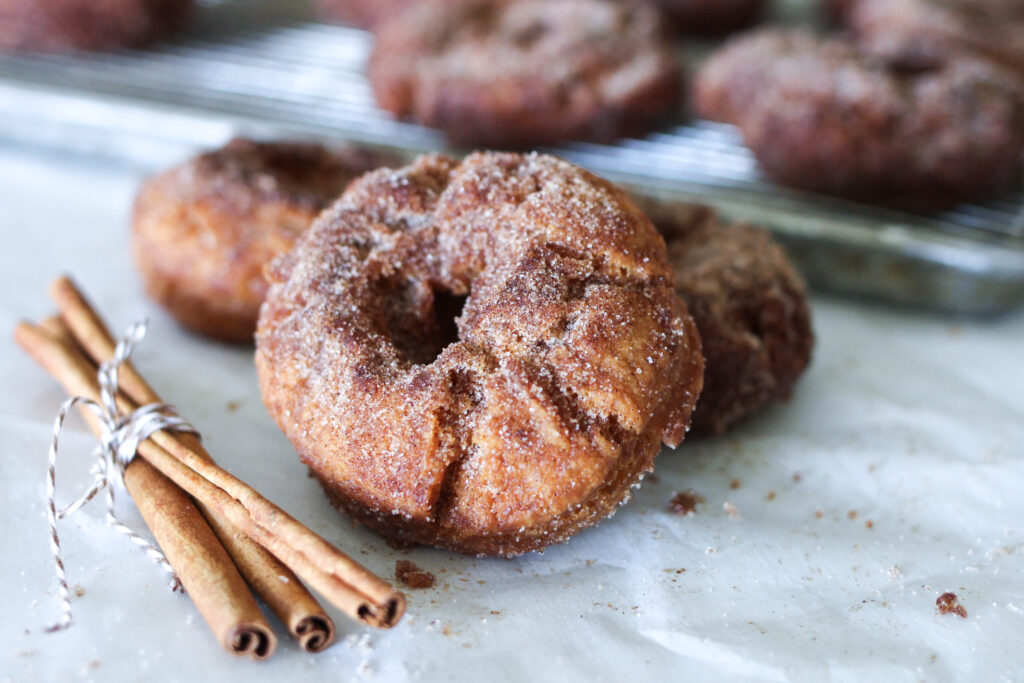 If you love apple cider, you will love this fall treat! Crispy on the outside, soft on the inside, these Homemade Apple Cider Donuts are downright heavenly.

Fall is in the air! And what says fall more than a chill in the air, the leaves changing color, pumpkin treats and of course, apple cider?! These Apple Cider Donuts are everything reminiscent of this season. I love the crisp outside, coated in cinnamon sugar, encasing a warm, fluffy inside. It’s the perfect balance of crunch and melt in your mouth goodness!

I have to give a shout-out to Cross E Ranch for the inspiration for this recipe! There is a wonderful little family farm in Utah called Cross E Ranch, known for its corn maze, corn pit, big slides, and homemade donuts, specifically their Apple Cider Donut. People go to Cross E Ranch JUST for the donuts. I know I’m guilty! Since I first indulged these delicious treats, I have wanted to create a similar recipe at home.

If you love cake donuts you will love this treat. It’s like a piece of cake, deep fried and rolled in cinnamon sugar! The recipe makes a dozen, plus a dozen donut holes for, um, taste testing. I always fry a couple of donut holes to test the temperature of the oil before frying a donut.

Speaking of frying, I have not yet tried these in an air fryer, but as soon as I do, I will update the recipe. If you try this in the air fryer, please leave a comment and give your feedback!

The reduced cider in the dough gives this donut its unique flavor. I hope you’ll make time to mix up a batch of these tasty treats this fall. Nothing says comfort like a warm homemade donut!

**Update** Changes in recipe. After receiving feedback from several readers, I added another 1/4 cup of flour to the recipe, for a total of 4 cups of flour. We also removed the oil from the batter and increased the butter to 6 tablespoons. The oil in the batter was causing the dough to separate for some while frying. After further testing, we decided to change the recipe to include butter only. 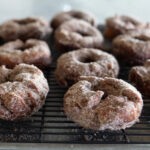