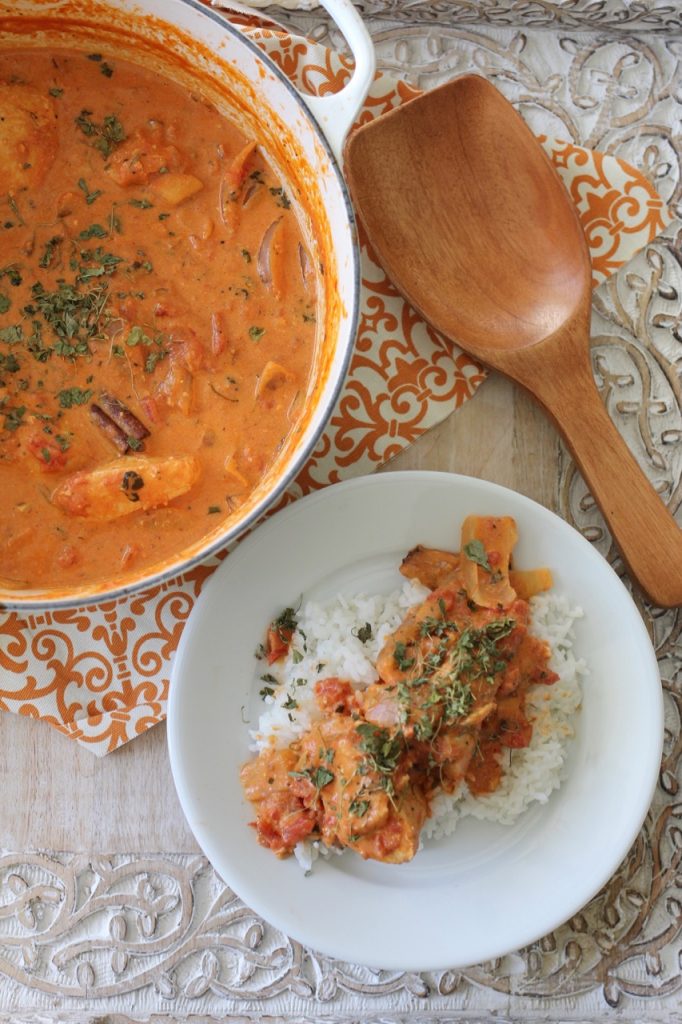 How do you feel about Indian Butter Chicken? Are you afraid of Indian food? Or do you love it, but have no idea how to go about making it at home? This recipe for Indian Butter Chicken is quick and easy and the perfect dish if you’re ready to try making Indian cuisine, but not sure where to start.  Of all the recipes I’ve made and shared on ABK over the years,  this has to be in my top 10!

Why is it Called Butter Chicken?

If you’ve heard of, but never eaten Indian Butter Chicken, you may wonder exactly what is Indian Butter Chicken? It’s a well known dish that originated in Delhi around 1950. It was said to be hatched by three men who were native Indians and owners of Moti Mahal,  a well known restaurant in Delhi.  Many versions of the story are told, but most agree the creator was trying to find a way to use up leftover Tandoori chicken, a popular menu item. Instead of tossing the leftover cooked  chicken, it was placed into a pot, simmered on low with lots of butter, tomatoes, cream and spices. Hence the name, Indian Butter Chicken, aka Murgh Makhani in India.

To me one of the biggest differences is the use of cardamom in Indian butter chicken, which is best when crushed using a mortar and pestle. If you don’t want to purchase the pods or don’t have a mortar and pestle, just use cardamom powder. The flavor will not be quite as intense, but will still work in this recipe. A little cardomom goes a long way, so be careful to not overdo it!

Indian Butter Chicken, an Indian recipe everyone will love

Remember when Pho seemed “out there” a few years back? Or sushi? Back in the 70’s (when I was growing up) Mexican restaurants were almost non-existent in my hometown!  Indian food has made its way into many American kitchens now, and Indian Butter Chicken is about as basic as it gets when experimenting with Indian cooking. If you want to dip your toe in the large sea of Indian cuisine, this is the perfect starting point. When making Indian Butter Chicken, you’ll use a small sampling of the spices used in Indian cooking. Have you ever been to the spice market in Delhi? It was one of the most fascinating sights I have ever seen and experienced. I picked up spices to make a few Indian dishes when there. While bringing home spices directly from India is fun, you don’t have to travel 20+  hours by air to find the spices to make Indian Butter Chicken! The spices used in this dish are easily found on Amazon and in most grocery stores. We looked at: Trader Joes, Harmons, Target, Walmart and Kroger and found all of the spices needed to make this recipe for Indian Butter Chicken.

Why India? Rising Star Outreach,  and traveling to India for the first time…

When I was in high school, my Spanish teacher, Señor Turner told us to spend our money on adventures and experiences, rather than things. I’ve never forgotten his advice. Way back then, I created a bucket list in my mind of places I wanted to visit: Italy, France, U.K., Mexico, China to name a few.  I have to admit, India was not on that list until about 15 years ago when I heard about  Rising Star Outreach.

I first was introduced to Rising Star Outreach (RSO) in the early 2000’s.  I heard about Becky Douglas a mother of 10, who founded RSO after her oldest daughter Amber took her life after a battle with Bipolar Disorder. After Amber passed away, Becky learned that Amber had been sending a portion of the money Becky and her husband gave her for college expenses to an orphanage in India!  They decided in lieu of flowers for the funeral, they would ask  friends and family to  donate to the orphanage Amber supported.  The decision to donate the money collected would be the beginning of years of service in India for Becky.  After her first trip to India, Becky recalls…  “Beggars, with rotting hands and feet and no eyes and open gaping wounds,” said Douglas. “At one stoplight a man put his hand in the window (of the car) with maggots crawling through his hand. Their suffering was just almost palpable.” Becky couldn’t get the images out of her mind, so when she returned home, with the help of her husband and a few friends, she founded Rising Star to help the leprosy affected.

Over the past several years, RSO has grown from a small group of friends taking suitcases full of blankets, crochet bandages and toothbrushes to India,  to a K-12th grade boarding school, mobile medical clinics providing  vision care, and a screening program to detect and treat new cases of leprosy. Rising Star Outreach also helps facilitate infrastructure, growth and community development within India’s leprosy colonies. Colony leaders receive micro-grants, manage the disbursement, repayment, success, and the growth of the loans. This is only part of what RSO is doing to uplift in India. Seeing the difference RSO is making in the lives of so many people who previously had no opportunities for employment or education is truly heartwarming and inspiring! I was blessed to witness the change RSO has made in countless lives! .

A few take-aways from India

I learned a few things while in India. First, the Indian people are lovely. Most are warm and friendly and love to show visitors their customs and traditions. Many times while visiting Leprosy colonies, Women would motion to us to come and join them in a meal being prepared on a stove fashioned out of bricks or rocks outside of the home. They cooked breads such as Chapati over an open flame for lunch. In the colonies, men and women warmly welcomed us as visitors and allowed us into their homes for a glimpse of what it means to live as a leprosy effected person in the colonies. It’s difficult to believe that leprosy colonies still exist in our day and age. When I tell most people about this, they look at me in disbelief. Many comment about leprosy in biblical times, but are surprised people still live in colonies.  I saw first hand the wonderful and meaningful change RSO has made in the lives of so many people effected with leprosy. The opportunity to receive an education was non existent for  family members of people afflicted with leprosy just a few years ago. But now, through generous donations, many of the people in the villages we visited are thriving. Their children and grandchildren are receiving an education. Many have and will graduate with high school diplomas, and go on to receive a college education, a first for most families with leprosy in their family line.

Another take away from my time India- I loved most of the Indian food I tried. The breads or flatbreads were delicious! Naan, Chapati and Parotta were all favorites with me. We tried several types of  Indian Curry (most were too spicy for me!), Tandori Chicken, Chicken Tiki Masala, Vegetable Aloo Tikki to name a few. My rule when traveling is to try everything (except maybe deep fried insects and stomach) at least once when the opportunity presents itself.  Also, we had an opportunity to take a tour of a restaurant kitchen while on the road one day. The owners very proudly showed me how they cooked several of their restaurant specialties. Quite an experience! Not a prearranged tour, I simply asked to see their kitchen and how they made some of their menu times. Travel tip for foodies- Most of the time when I ask to see a kitchen the owners happily oblige 🙂

At the end of our adventure-  which included everything from experiencing Indian food in all types of establishments to riding elephants,  to seeing the Taj Mahal at sunrise,  visiting a monkey palace (where monkeys ran free in abandoned palace and grounds), to learning how textiles are dyed and produced,  seeing how rugs are woven using ancient techniques and watching people worship and complete their pilgrimage to Varanassi and the Ganges river,  two things stand out in my mind. The joy of the people of India regardless of their circumstances. It seemed that almost every person we met was joyful. They had nothing of material means, but their smiles and attitudes reflected  positive attitudes. My other big take away- One person can make a difference. What if Becky Douglas had turned her head and gone back to her comfortable life in the US and never done anything about the suffering she saw in India so many years ago? What if she had said I’m only one person and I can’t make a difference? What if all of the people who have joined with her said the same thing? I’m grateful for her courageous example of DOING,  instead of being comfortable.

This week,  I will be traveling with a small group to visit a campus RSO is now operating in the Northern part of India, near Bihar. In a few days, I’ll share another recipe and an exciting announcement about a fundraiser you can be a part of to help our brothers and sisters in India…

Quick and Easy Indian Butter Chicken you can enjoy with your family at home! This affordable option to ordering out is so simple you’ll want to make regularly!

For chicken and marinade: