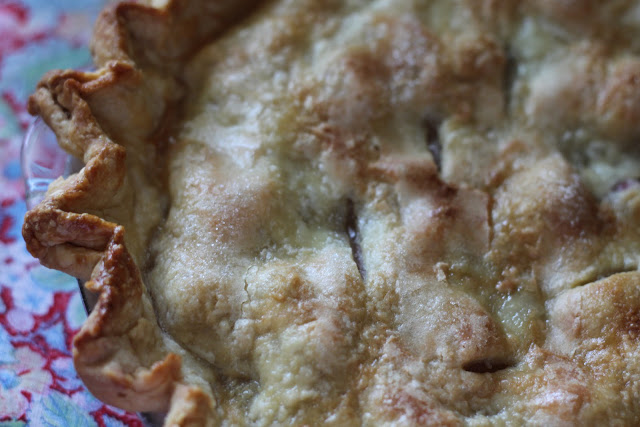 Rhubarb pie.You’ve probably eaten it many times. I think I had a bite of rhubarb pie once and it was underwhelming, to say the least.

A few weeks ago, I had a life changing experience with Rhubarb…

Rhubarb is Melinda’s favorite pie. Did I tell you she turned 50 in July? On her 50th birthday, her requests included eating a rhubarb pie. Well, maybe not the entire pie, but a slice or two. I knew I should have made her a pie for her birthday, but it was a crazy day for me, and it just didn’t happen. She ended up getting her wish, but it was a Marie Callendar’s pie.
I know, sad.

Having to eat a store bought pie on your birthday? I felt badly about that for days. A few weeks after her birthday, I finally got around to making a pie for her. It was my first attempt at making anything with rhubarb. It was also my first time tasting raw rhubarb. Yikes. Not recommended.

If you want to make a rhubarb pie, the clock is ticking. The produce guy told me it’s only available for a couple more weeks, then you’ll have to wait again till Spring, or make a trip to Marie’s.

After you roll out the bottom layer of dough, cover it with sugar/flour mixture. This is an important step, the sugar creates a caramelized layer that will protect the bottom crust from becoming soggy.

Throw in the chopped rhubarb, more sugar (who needs an energy drink when you can have a slice of this?), and dot it with butter.

Tops crust, throw it on. I brushed on a little beaten egg and sprinkled with more sugar. Just in case.

-First tip when making a home made pie. Use home made crust.
-Do not mix the rhubarb with the sugar before placing in pan. The sugar layer on bottom is essential to this recipe working. Rhubarb gives off a lot of water, so the flour/sugar mixture will thicken the juice.
-The butter in the pie adds flavor and helps the filing to solidify.