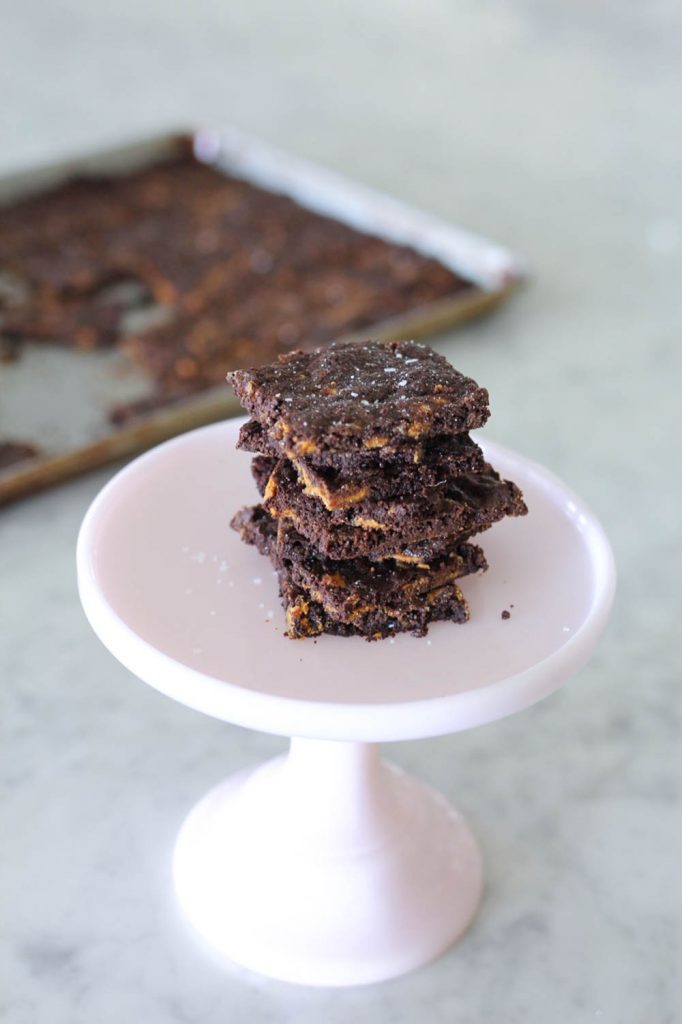 It’s a Brownie. It’s Brittle. All in one treat.

I tried nuts, chocolate chips, and salted caramel chips when developing  this recipe.  Salted caramel chips are my favorite, which isn’t a huge surprise, since it’s my favorite of the Sheila’s packaged variety as well!   I purchased a Kroger (store) brand Salted Caramel Chip because that’s what was available the day I tested this particular combination.  Hershey’s sells a Sea Salt Caramel Chip  in Target and Walmart for about $2.50 per bag.

Baked to perfection and eggsperimentation

Baking once was not enough, this brownie needed a second bake to achieve just the right crispy texture. If you just bake once, the brownie is still soft in the center. Cutting and then baking again will yield the crispy brownie you’re looking for in a true Sheila G’s Salted Caramel Brownie Brittle copycat! I also experimented with eggs in this recipe. Sheila G’s lists egg whites as an ingredient. I did see a significant difference in the batches I made with whipped egg whites, versus whole eggs. The egg white definitely makes a difference in the texture of the brownie brittle. The brownie brittle made with eggs is good. Don’t get me wrong. But, the egg whites vs the whole egg make this recipe a little closer to the Sheila G’s store bought treat!
Truth be told, this recipe doesn’t take much time. It’s worth the few extra minutes during the second bake to get the crunchy brownie texture. Salted Caramel Brownie Brittle is SO much better than buying a store-bought version, not to mention easier on the budget. Crispy, delicious brownie edges made in your own kitchen, on your own time. That’s my kind of dessert.
Sheila’s Salted Caramel Brownie Brittle is all the chocolatey goodness you love in a brownie, with a crunchy, delectable, thin texture. One of these squares is about 1/4 the thickness of a regular brownie, and still satisfies my chocolate cravings with less calories. Another bonus, Salted Caramel Brownie Brittle stays fresh for at least a week. I’m looking forward to using this recipe for birthdays, holidays, and any other occasion. It’s perfect for gift-giving. Just package it with a small brownie spatula for a cute and creative treat.  You’ll never want to buy store-bought again after you try this homemade version of Sheila G’s Salted Caramel Brownie Brittle! 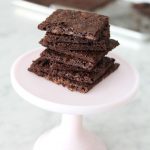 Salted Caramel Brownie Brittle is a brownie and candy in one yummy treat!