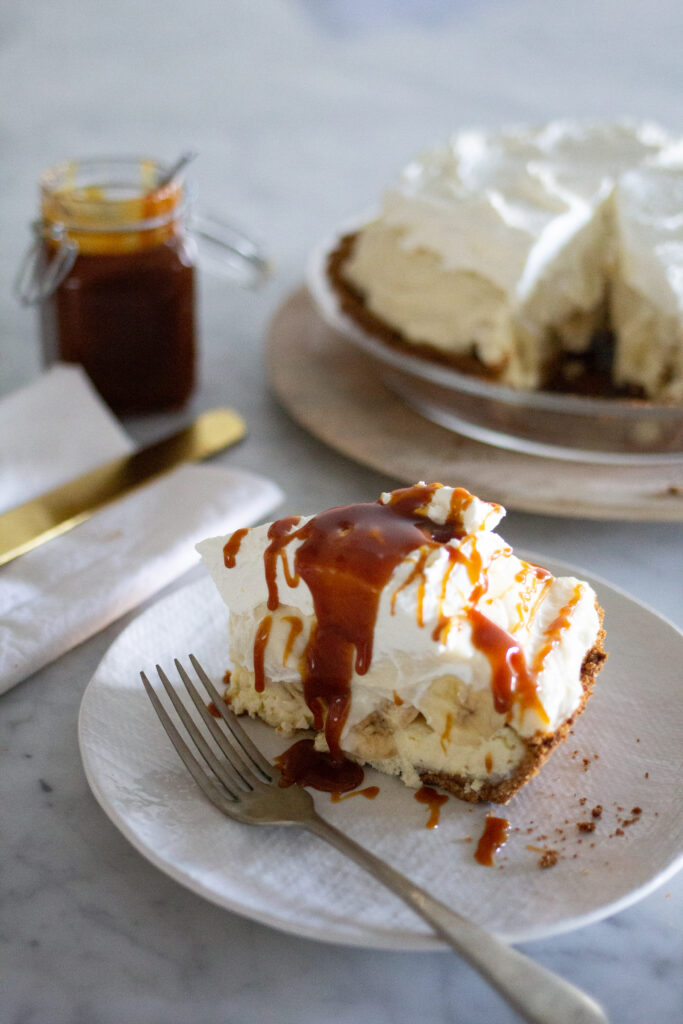 The Dodo Banana Cream Cheese Pie is a show stopping dessert. The first layer of creamy cheesecake is nestled in a Biscoff and graham cracker crust. Next, a layer of bananas , creamy vanilla custard, whipped cream, and finished with warm caramel sauce.  If your love language is PIE, you’re going to be over the top in love with ABK’s copycat of The Dodo Banana Cream Cheese Pie.

This pie is a completely made-from-scratch homemade dessert. Each bite and layer is filled with a special combination of ingredients to make this heavenly treat. At first glance, you may think this recipe is too complicated to tackle. But a closer look will reveal that it is really just a few simple layers that are made in stages. That said, if you want to go the semi-homemade route, I will give you options for making this dessert with prepared short-cut items.

If you choose to take the homemade option, you’ll take your dessert to the next level! Don’t let this pie overwhelm you. Think of each component as a layer of love!  I HIGHLY suggest making the crust, cheesecake layer and vanilla custard one day, and assembling the pie the following day.

What is the Dodo?

The Dodo Restaurant is a SLC institution. Originally opened in 1981, it has moved a few times from 9th East location, to downtown and is now settled in the Sugarhouse area of Salt Lake. The Dodo was also the name of a bird, now extinct, which is included in the branding for the Dodo Restaurant! The bird is extinct, but the Dodo is alive and well in Utah!

Popular desserts at the Dodo Restaurant

There’s a reason DESSERTS are the first category listed on The Dodo website. This Toll House Pie from the Dodo is a crowd pleaser and one of the easiest pies you’ll ever make. The Dodo Toll House Pie was the inspiration when I posted my recipe years ago!

My daughter,  Female Foodie recently featured the Dodo Coconut Coffee Cake with Caramel Sauce (below) which also won accolades as a top rated dessert. Years ago Brooke told me about the Dodo banana cream cheese pie and said “you have to make a copycat!”  I made a trip to the Dodo, just to taste this pie. One bite and I knew she was right. This dessert needed to have a permanent place on the ABK website! It took me a few years, but here we are.

How to make The Dodo Banana Cream Cheese Pie:

Most important tips besides using quality ingredients when making this pie…Patience and time management. Custard can be tricky. I found that 1/4 cup plus one tablespoon is the perfect amount of thickener for this custard. I have had readers report their custard did not thicken. This is most likely due to not cooking long enough or trying to cook too quickly. If you have had issues with the custard setting up, try using 1/3 cup of cornstarch next time.

I highly recommend making the custard a day early and allowing the cheesecake layer to sit in fridge a day before assembling as well. It is best to let the layers set up after assembly for a full 6 hours before serving for best results. 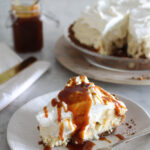 For the Crust and Cheesecake:

For the Whipping Cream:

A little nugget from Heaven joined our family last

Most of my tutorials are slow and methodical😅 H