Two and a half years ago, I started blogging about my fifth child, Cooking. I started because I was a little sad that my kids were growing up. A little sad that, although I love my boys, I was now the only girl left at home. It seemed like I was facing a never ending camping trip of sorts (non stop burping, smelly socks, flatulence(sick, I know), etc). Instead of meals where the girls loved my creations, the dinner conversations now sound like this: “Why is there fruit on my meat?!” Or after whipping up a honey Balsamic dressing for a salad-“Where’s the Ranch??”
They don’t get it.
Corrine (my oldest daughter) took pity on me and set up A Bountiful Kitchen.
It has been a great little outlet for me. I love to cook. I love taking pictures of food. I love to discuss recipes through convo and emails I get from friends near and far. This past week, I made twonew blogger friends. My new friend, Robin, who lives back East, asked me about a recipe for cinnamon bread. I’ve had this basic white bread recipe for about 100 years. It’s one of those tried and true, old but good. I added some cinnamon sugar and passed the recipe on to Robin.
Yesterday, while we were experiencing our 20th day of temperatures below 20 (or something like that)I mixed up a batch of Cinnamon Swirl Bread. There’s nothing like the smell of bread baking in a warm home when it’s cold outside. Nothing like it.
Oh, the Sweet Cinnamon Butter. Let’s just say I could have eaten it alone, as an appetizer. 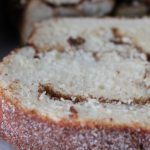 – *I like the texture of this bread when using bread flour instead of regular white flour. I prefer “Gold Medal Better for Bread Flour”. Found in most grocery stores. If using a bread flour, you will only need about 8-9 cups of flour.-This bread is wonderful sliced thick, toasted or used for French toast the next day.-yes, this also makes awesome cinnamon rolls.