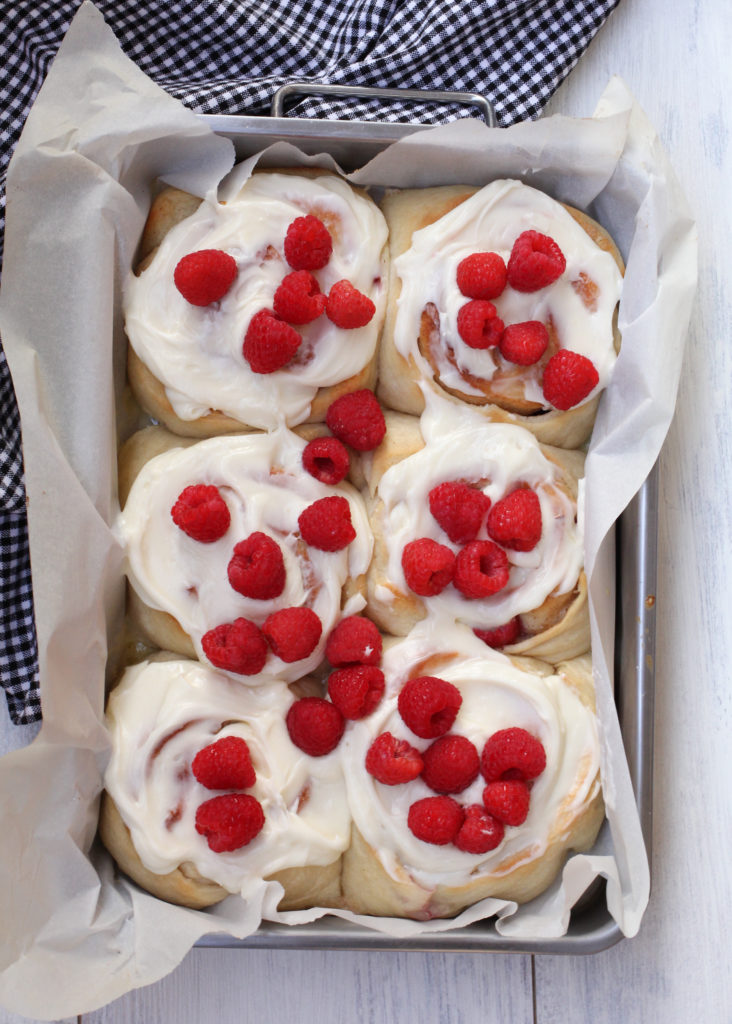 What comes to mind when you hear raspberry and cinnamon roll together? In the past, every time I purchased a raspberry cinnamon roll at a bakery I was disappointed. The thin layer of jam, or jam in the icing, or red food coloring combined with a lot of sugar and raspberry flavoring left me craving something better…

If I’m going to eat a raspberry cinnamon roll, I want RASPBERRIES in my rolls! Once I get an idea into my head, there’s no stopping me. My new mission in life was making the best Raspberry Cream Cheese Cinnamon Roll ever.

A Fun Change to an Old Favorite

There’s nothing better than a homemade cinnamon roll. My favorite type of cinnamon roll is not too light, not too heavy, a bit chewy, moist, with gooey filling and smothered with thick, dreamy frosting. I’ve developed a similar idea using traditional cinnamon rolls made into a fresh raspberry version!

You won’t find thin, flavorless filling in these rolls. This filling is pure heaven. Combined with the most perfect roll texture and thick cream cheese frosting, talk about a fun new way to celebrate the humble cinnamon roll!

When I’m in the mood to make a sweet breakfast treat, I tend to turn to my traditional Overnight Cinnamon Rolls or Cutler’s Cinnamon Rolls. Raspberry Cream Cheese Cinnamon Rolls are the best of both worlds. They are perfect for so many occasions: family brunch, holiday time, conference weekend, you name it! These sweet rolls belong on your table.

Some may be hesitant to add fresh fruit in baked goods, because it can make the bread or dough a little soggy. These rolls are definitely best served the same day, but they are perfectly delicious, even on day two.

I highly recommend using fresh raspberries when possible. My favorite brand of fresh raspberries for any type of baking are Driscoll’s. I’ve found this brand to be picked fresh and packed with very little water if any, so they work well in this recipe. You will need two pints or about 3 1/2 to 4 cups for one recipe if you’d like enough for topping the rolls as well as the filling!

Last year, Kathleen (my assistant and dear friend) told me she and her daughters tried pouring cream over cinnamon rolls before baking and they were over crazy about the results. I have to agree! The combination of cream poured over the rolls (see below) just before baking, juicy raspberries, and then frosting the rolls partially with a decadent cream cheese frosting while they’re still warm…amazing! Did I mention more fresh raspberries on top?! You’ve never tasted a roll this good.

How to make-ahead Raspberry Cinnamon Rolls

If you’re like me and you like to make everything ahead as much as possible, without compromising quality, I have good news for you! I initially thought this recipe would not freeze well because of the fresh berries. I was wrong. After experimenting, I’ve found a method that works and the rolls taste just as wonderful as if made and baked the same day! Follow the recipe until the rolls are shaped and placed into the baking pan. See recipe notes for details. After the rolls are shaped, they may be frozen until day of baking. You need to allow about 3 hours to let the rolls thaw and rise before baking.

Raspberry Cream Cheese Cinnamon Rolls are a must have on your holiday menu this year Pin this recipe so you’ll be able to find it easily. This recipe is sure to become a new family favorite. Oh, and one more bit of advice, take out your dessert plates, this sweet roll can’t be eaten on a napkin! 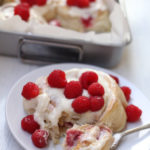 Thick and gooey cinnamon rolls filled with fresh raspberries, topped with cream cheese frosting and more fresh berries! Don't be intimidated by the amount of steps in this recipe! There are a few basic steps: make dough, let rise, make filling, shape rolls, make frosting, bake rolls, frost rolls. Much of the time in the recipe is to allow the dough and shaped rolls to rise!

Frosting (prepare while rolls are baking)