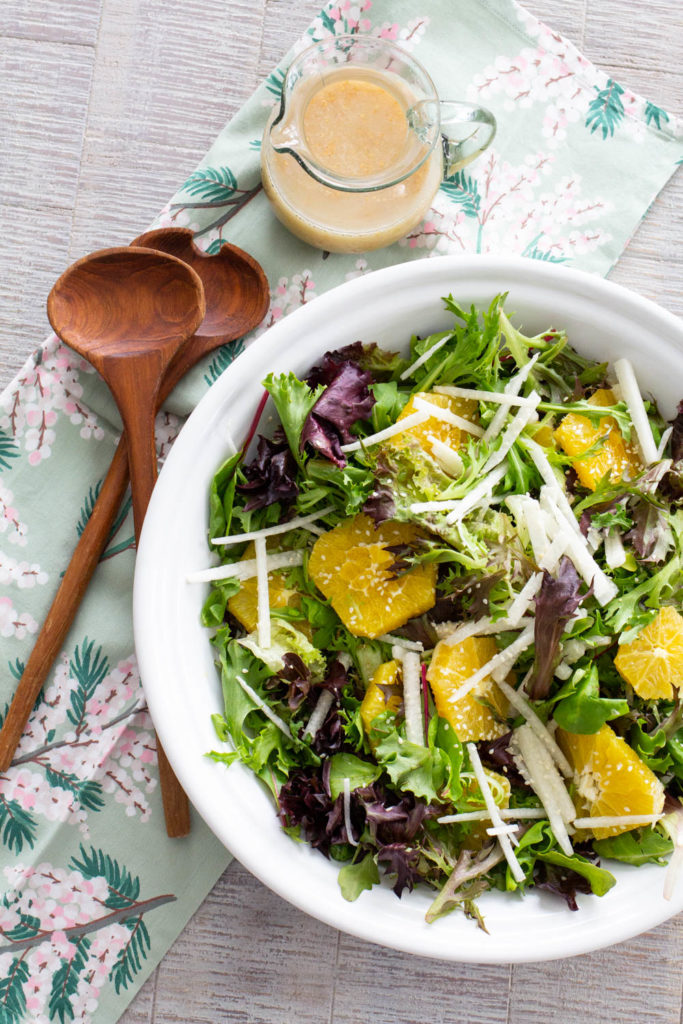 Gather ’round all of my salad loving friends! The winters can seem long during the early part of the year in Utah. A fresh salad is often a bright spot during the days of inversions!
Nothing is easier to throw together than this Mixed Green Salad with Jicama and Sliced Orange. The salad has three ingredients. Yes, THREE ingredients. So simple. The dressing has a whole 7 ingredients, all you have to do is cut, chop and mix the dressing together.
This recipe for jicama and sliced orange salad is the perfect salad to make in the winter. Oranges are sweet and plentiful in the winter and jicama is easily found from the fall months to the early spring in most grocery stores. If you’re wondering how to prepare jicama for eating, it is often found already sliced and prepared in the vegetable section of grocery, but is easy to peel and slice or cut into pieces. More than the flavor, I like jicama for its texture, which is very crunchy! I also like the white contrast in salads.
If you aren’t familiar to jicama, you may be wondering what exactly IS jicama? Jicama, sometimes referred to as a Mexican potato is native to Mexico. It looks like a cross between a turnip and a radish to me, only light in color. The outside of the jicama is a light brown or tan color, and the inside of the jicama is white. The root is the only edible part of the jicama. Jicama is usually eaten raw, but I have seen some recipes which include stir frying in a savory dish!
I love this salad as an accompaniment to dinners from Thanksgiving to Easter. It’s the perfect make ahead salad, cutting the oranges and jicama and placing in separate bags in the fridge until ready to assemble.
The dressing is light and refreshing and can be made ahead or right before serving. If you have leftover dressing, store in the refrigerator for up to two weeks!
This post has been updated with new content, current photos and recipe adjustments February, 2020. Originally posted 2010.
You’ll also love these easy to make salads… Wedge Salad with Green Onion Dressing,  Spinach and Pear Salad,  and Apple, Feta and Spiced Pecan Salad.
Print